Terrorism by The Presnyakov Brothers 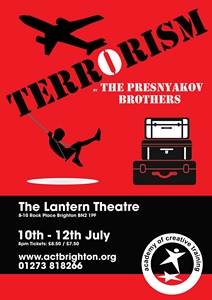 Terrorism by The Presnyakov Brothers

The extraordinary debut play from the Royal Court by two brothers from Siberia. A series of seemingly unrelated scenes portray the ordinary frustrations of everyday life: office workers bickering, a couple committing adultery, grannies complaining about their husbands. But the scenes unfold to reveal the mistrust and dysfunction that have become the norm, in Russia and elsewhere.

'A play with this title has an obvious resonance right now. But the extraordinary thing about this deft and brilliant piece by Siberia's Presnyakov Brothers is the way it extends... This is a play about the breakdown of society in contemporary Russia. What astonishes is the cool, sardonic wit that the Presnyakov brothers bring to their task... beautifully realised in Sasha Dugdale's translation... Russian society may be in disarray, but, on the evidence of this and the recent work of Vassily Sigarev, a sense of dislocation yields first-rate drama'. Guardian

'A bitter, funny, penetrating look at the toxic effects of living with fear... Terrorism shrugs off more ideas in quarter of an hour's wit than most political debating plays do in an evening'. Observer