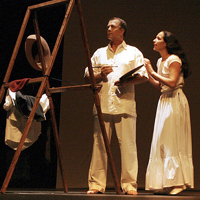 The show offers portraits of Mexican artist Frida Kahlo's intense life until certain moments before her death.  Premiered in Mexico City in 2008 as a part of the Interculturalidad Canarias-México international festival, the show has been touring since its opening night with great success throughout México, Spain, the United States and England.