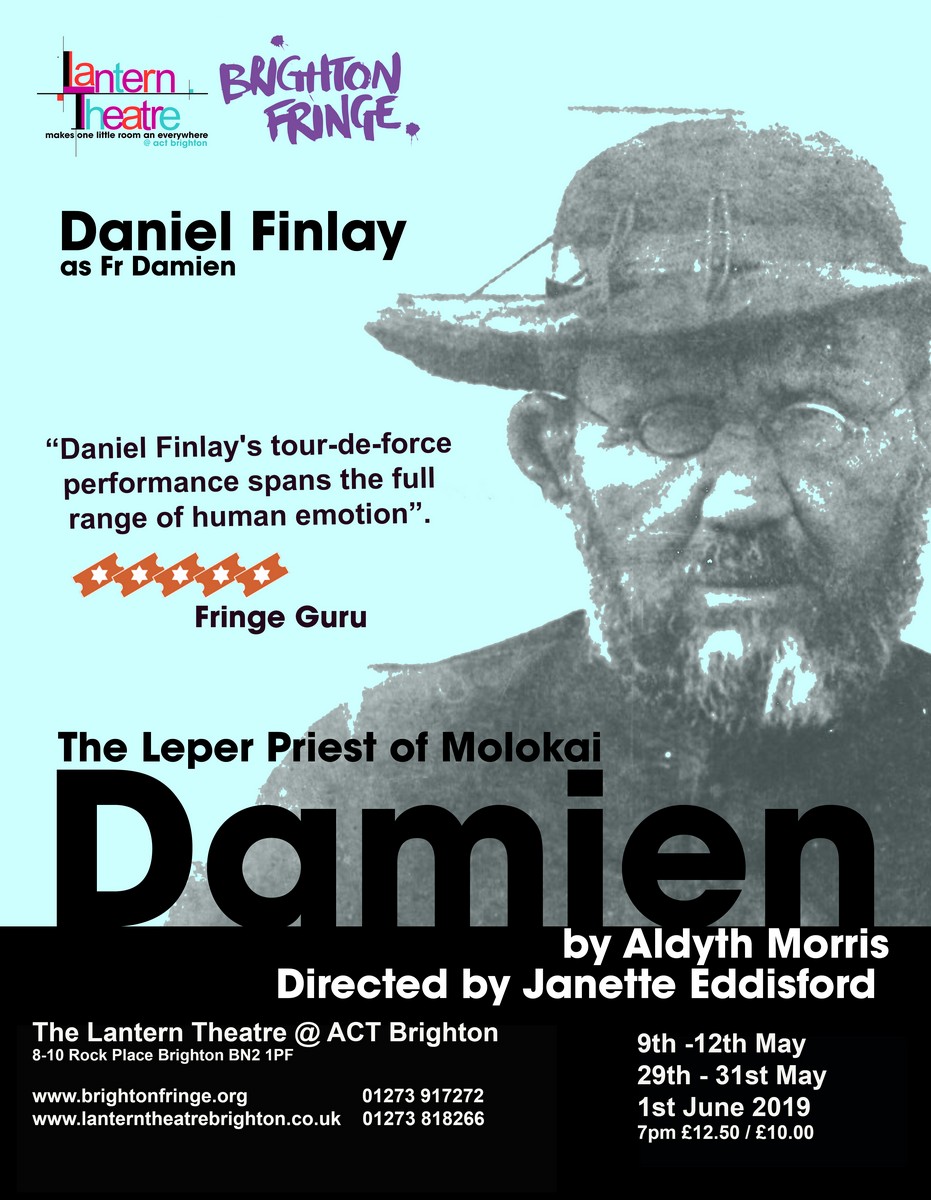 The story of Father Damien de Veuster, the leper priest of Molokai and patron saint of outcasts.

In this passionate, one man show, actor Daniel Finlay channels the powerful stories of the challenges that Damien experienced while serving the community of exiled lepers on a remote Hawaiian island in the 1870’s and 80’s, until his own life was taken by the affliction on April 15, 1889.

He was born Joseph and received the name Damien in religious life. In 1864, he was sent to Honolulu, Hawaii, where he was ordained. For the next nine years he worked in missions on the big island, Hawaii. In 1873, he went to the leper colony on Molokai, after volunteering for the assignment. Damien cared for lepers of all ages, but was particularly concerned about the children segregated in the colony. He announced he was a leper in 1885 and continued to build hospitals, clinics, and churches, and some six hundred coffins. He died on April 15, on Molokai.... Pope John Paul II declared him beatified on June 4, 1995. Father Damien was canonised in a ceremony at the Vatican on October 11, 2009.

"In our own time as millions around the world suffer from disease, especially the pandemic of HIV/AIDS, we should draw on the example of Fr. Damien's resolve in answering the urgent call to heal and care for the sick."
President Barack Obama 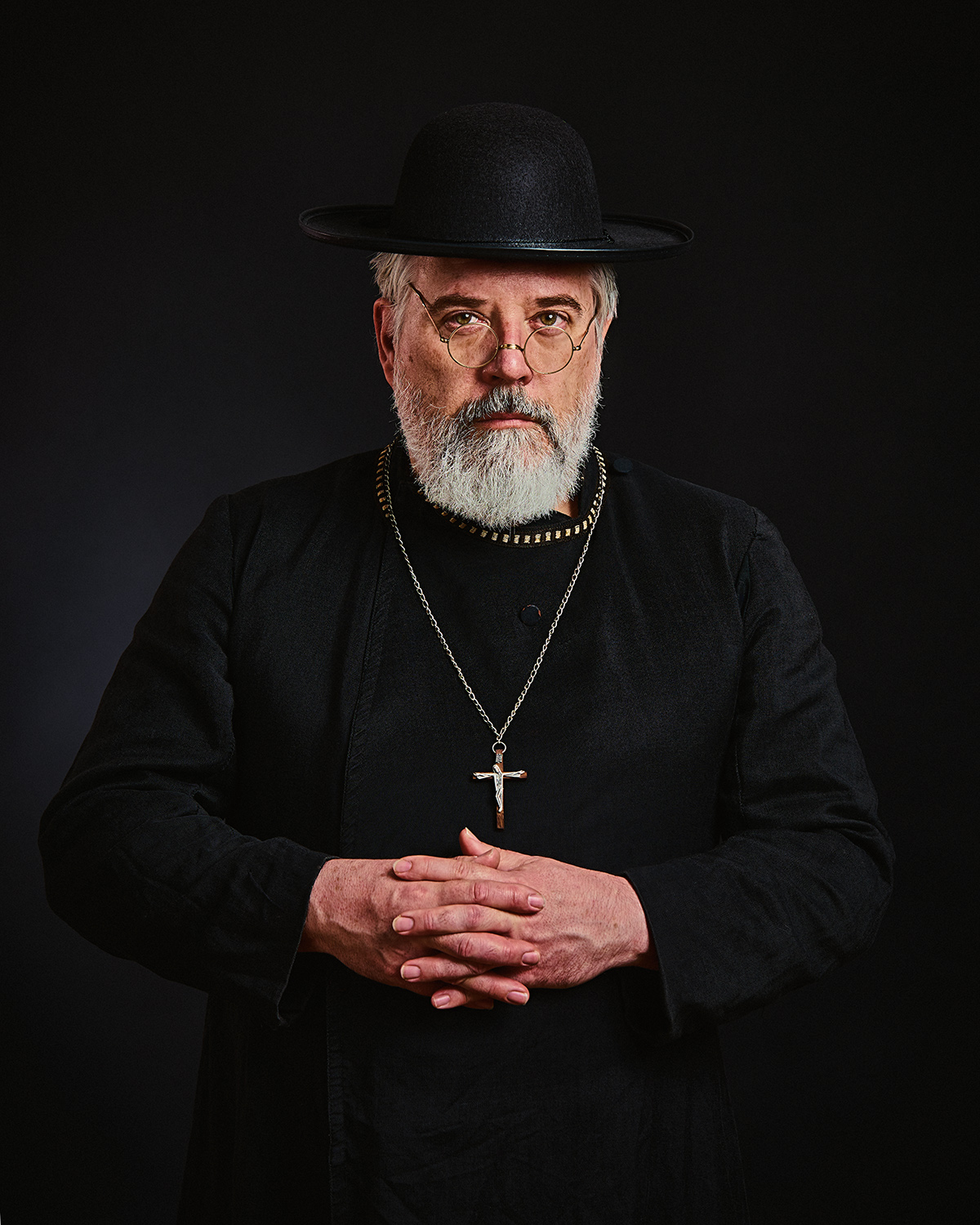 Damien is one of Fringe 2016’s hidden treasures: a 40-year-old script, a masterful solo performance, and a story that’s both shocking and inspirational.  It tells the real-life tale of Father Damien de Veuster, a Catholic priest – and now a saint – who lived in a community of leprosy sufferers on a remote island in Hawaii.  Cruelly exiled by their government, the lepers of Molokai endured a lawless and impoverished existence, cut off even from the comforts of religious faith.  Cut off, that is, until a young Flemish priest named Damien came along.

Daniel Finlay’s tour-de-force performance spans the full range of human emotion.  We see Father Damien consumed by impetuous enthusiasm, as he establishes his mission on the island; enduring quiet moments of doubt, when he finds himself falling short of his own spiritual ideals; and angry – at one point, terrifyingly angry – when he encounters the crimes and heartlessness of others.  Finlay has the knack of making you believe in imagined scenes; in one particularly charming passage, he addresses a group of children, speaking to each one so convincingly and specifically that you’d swear they were actually there.  Throughout it all, however, his Damien retains a diffident, slightly stumbling persona, lending the 80-minute monologue the natural feel of a friendly late-night chat.

The script, similarly, covers a lot of ground, yet remains eminently approachable.  It soon becomes clear that Damien is speaking from the afterlife – yet his body is making an important journey back in the earthly world.  Building on that clever combination, playwright Aldyth Morris charts a clear but intricate course through history, visiting both Damien’s years in Hawaii and the formative events of his younger life.  At every stage of the story, there are subtle unanswered questions – helping to ensure that this detailed biography never feels predictable or stale.

Janette Eddisford’s set and design contribute hugely to the texture of the play.  A host of evocative detail greets us as we walk in: from the incense burning in the corner, though the coffin-like chest draped in a Belgian tricolour, to the little yellow flags pinned to the ceiling (a modest but crucial symbol, whose significance will only later be revealed).  The lighting, too, is striking at times, with beams cut through the incense-rich air invoking Father Damien’s personal communion with God.

Damien is a meaty, thoughtful play, which confronts the casual cruelty of well-meaning officialdom and poses thornier questions around the life-long impact of religious belief.  In Finlay’s hands, however, this complex and detailed monologue never feels effortful to follow.  If there’s justice in the world, this production will have a long life after the Fringe; but see it now if you possibly can. 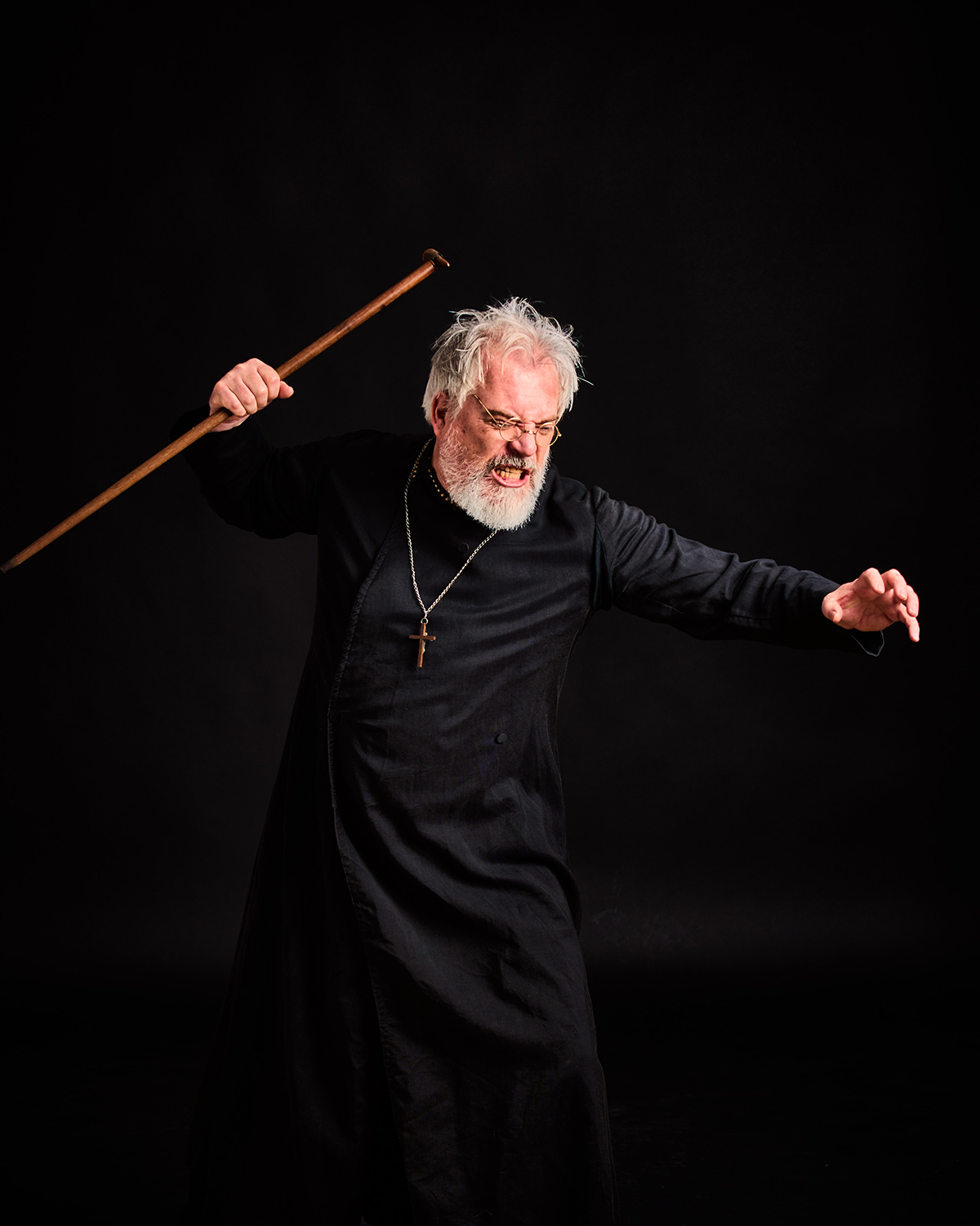 “An outstanding piece of theatre”

A one-man show about a Belgian priest who goes to live in a leper colony in Hawai, in a small slightly out of town venue isn’t the easiest sell in the overcrowded fringe marketplace and that was reflected in the small audience on it’s opening night.

If the reaction of that audience was anything to go by those seats will not be empty for long. Designed and Directed by Janette Eddisford this is an outstanding piece of theatre that radiates quality from the moment you step into the room to be engulfed in the odour of frankincense.

Two church pews frame a screened confessional at the back of the stage. A statue of Our Lady and a vase of lilies on one side, a wooden table and chair on the other. Mid-stage a travel trunk containing props, that serves as chair and coffin. Each piece is well chosen and to my untrained eye fitting to the period. This might seem like a small point but there is no making do here. A lot of effort and thought has gone into the set and staging and this attention to detail is obvious in all aspects of the production. The music and sound effects, the minimal but effectively used lighting, nothing jars, everything serves to enhance the storytelling.

The play itself, written by Aldyth Morris and first performed in 1976 tells the story of Father de Veuster who is called by his God to serve the lepers of Hawai, on their prison island of Moloka’i. Before seeing the play I wondered how this could work. How could one man tell this story and make it engaging? I needn’t have worried. Starting at the end, the script jumps about in time giving us glimpses into the important episodes and slowly revealing the character of the man himself. It’s a well-written script, poetic, and in Daniel Finlay’s hands, hypnotic and moving.

Daniel holds us from the minute he walks from the darkness on to the stage. His voice is melodic, his performance natural and effortless as he ranges from laughter to fury; strong and fearless in defence of his charges, vulnerable and tender in his own self-doubt.

There’s nothing groundbreaking about this show. It’s a traditional piece of one man theatrical storytelling but I was not the only person in the audience moved to tears by this performance.

If you’re a regular theatre-goer, this is a must-see production which deserves to sell out.  If you make or aspire to make quality fringe theatre then this is a masterclass in how it’s done. 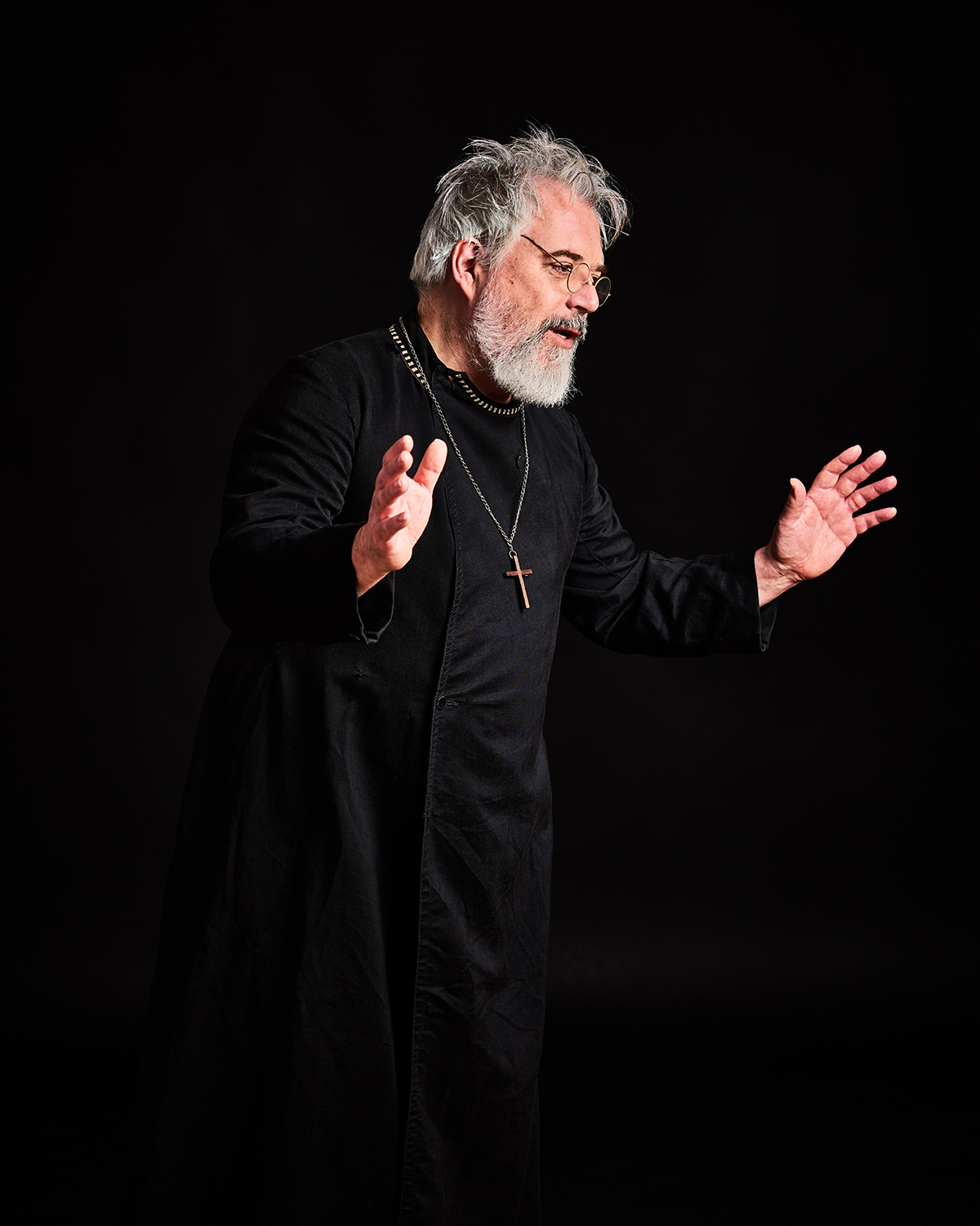 The Lantern Theatre has seen many shows there in recent years, but never has such a heartfelt and inspiring one man show taken place. Daniel Finlay took on the challenging role of Father Damien De Veuster, who was known as the lepur priest of Molokai and patron saint of outcasts. This role pushed this actor to places that were passionate and extremely powerful to watch.

I personally never knew about this real life inspirational man until I saw 'Damien'. What was clear is the risk he took to his health as he gave people with leprosy hope when they felt there was nothing left. Because of his actions, we would not have the progress made in terms of this disease today and that was so sensitively portrayed by Finlay. What should also be noted is that the raw emotion he showed as the reality of his situation hit him came to light. It was almost as if he knew exactly what choices to make for this complex character in a seamless way. Although it was scripted, the awkward pauses as he shifted the set and uneasiness as things unfolded in front of him made Damien more grounded and interesting to watch.

Interestingly, it was not just the way he held the audience as he shared his story with us that was impressive, but the way the whole stage used the set and the use of candles and the gorgeous smell of frankincense took us into his world of the church. Jannette Eddisford's directorial vision added more detail to all the senses and needs to be applauded for those choices too.

Damien is another top 5 highlight for this year's Brighton Fringe and is extremely highly recommended to be seen.